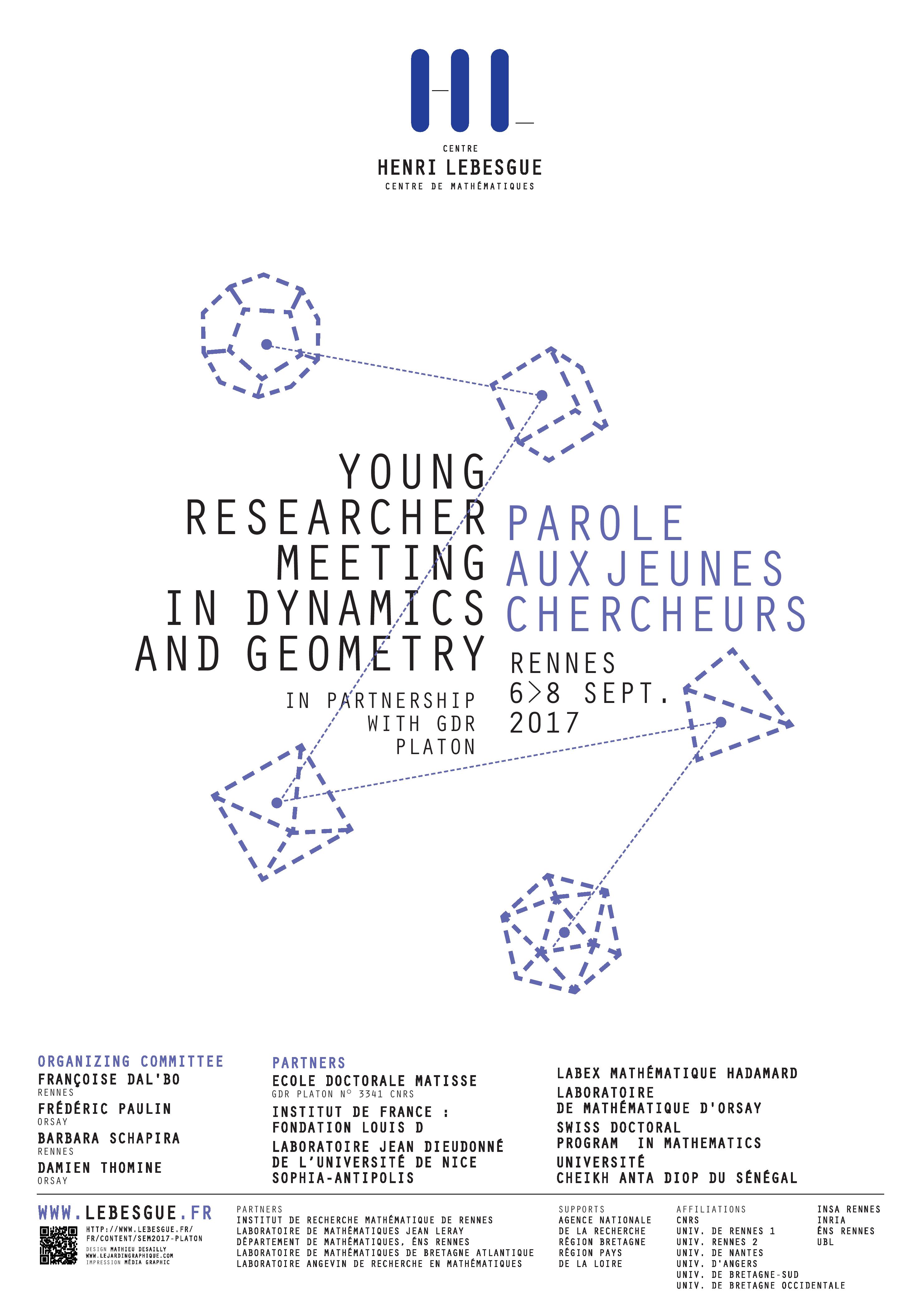 Since its creation the Platon network (GDR National Center for Scientific Research n°3341 http: // costia.free.fr / platon/) leads actions towards young researchers in ergodic geometry. The recurrent young researcher meeting is one of the highlights of the year. The goal is to allow about ten PhD students or recent doctors to expose their work and promotes discussions between young and senior researchers. The "Young researcher meeting in dynamics and geometry" follows the spirit of these recurring meetings with an international dimension brought in particular by Swiss and Senegalese networks.

The deterministic chaotic behavior of an invertible map T is appropriately described by the existence of expanding and contracting directions of the differential of T. A special class of such maps consist in Anosov diffeomorphisms. Every 2-by-2 hyperbolic matrix M with integer entries induces such a diffeomorphism on the 2-torus. For all pairs of real-analytic functions on the 2-torus, one defines a correlation function for T which captures the asymptotic independence of such a pair under the evolution T^n as n tends to infinity. What is the rate of convergence of the correlation as n tends to infinity, for instance what is its decay rate? The resonances for T are the poles of the Z-transform of the meromorphic continued correlation function. The decay rate is well-understood if T=M. There are no non-trivial resonances of M. In this talk, I consider small real-analytic perturbations T of M where at least one non-trivial resonance of T appears. This affects the decay rate of the correlation.

Let M be a manifold with pinched negative sectional curvature. We show that, when M is geometrically finite and the geodesic flow on T^1M is topologically mixing, the set of mixing invariant measures is dense in the set P(T^1M) of invariant probability measures. This implies that the set of weak-mixing measures which are invariant by the geodesic flow is a dense G-delta subset of P(T^1M). We also show how to extend these results to geometrically infinite manifolds with cusps or with constant negative curvature.

An affine interval exchange (AIE) is a piecewise affine map from the circle to itself. Such a map defines a dynamical systems over the circle by iterating it. With an AIE comes naturally a family of AIE indexed by the circle: they are defined by pre-composing the initial AIE by a rotation. The presentation will focus on the study of possible dynamical behaviors of such a family of AIE through a peculiar example.

We present some local topological rigidity results for the set S of non-geometric, compact -- with possibly empty boundary and no spherical boundary components --, orientable Riemannian 3-manifolds having torsionfree fundamental group, with bounded entropy and diameter. By "local", we mean that we consider S endowed with the Gromov-Hausdorff-topology. We shall provide examples to show the necessity of the assumptions and discuss some open problems. Moreover, we shall give a proof of the finiteness of the homeomorphism types of the manifolds in S. These are joint works with A. Sambusetti (Rome, Sapienza).

In this talk, I will explain what is a rational map, how to define its k-degrees, and I will study the k-degrees of its iterates. I will explain how the study of the growth of these sequences of numbers helps in understanding the dynamics of these maps.

Consider the standard contact structure on the 3-sphere. The associated subriemannian metric has dimension 4. The Gromov comparison problem asks about how the Hausdorff dimension with respect to this subriemannian metric is related tothe Hausdorff dimension with respect to the usual (Riemannian) metric. We will look at this problem in the case of limit sets of discrete groups of complex hyperbolic isometries.

I will talk about the growth of the dimension of mod-p homology groups of locally symmetric spaces. Let G be a higher rank Lie group and X its symmetric space and let L be a lattice in G. Results on the rank gradient by Abert, Gelander and Nikolov imply that if L is right angled then for every sequence of subgroups (L_n) of L, the dimensions of the homology groups H_1(X/L_n,Z/pZ) grow sublinearly in the volume of X/L_n. In the special case p=2, I showed that the same statement holds for any sequence of lattices L_n with volume escaping to infinity (even if they are pairwise non-commensurable).

Bourgain's sum-product theorem is a metric version of ErdÅ‘s-SzemerÃ©di sum-product theorem. It asserts that a typical set of real numbers grows fast under addition and multiplication. We will present a generalisation of Bourgain's theorem to matrix algebras and discuss how it is motivated by a ergodic problem, namely, quantitative equidistributions of orbits on the d-dimensional torus under sub-semigroups of SL(d,Z).

We study actions of discrete groups on classifying spaces (or classifying spaces for proper actions). For instance the hyperbolic plane is a classifying space for proper actions of the group PSL(2,Z) (but not of minimal dimension). Such spaces can be used to compute the cohomology of the group, so we want them to have the lowest possible dimension. This leads us to the definitons of the (proper) geometric dimension and the (virtual) cohomological dimension. These two dimensions are not always equal, we will see it is the case for a lattice in the group of isometries G of a symmetric space of non-compact type without Euclidean factors (such a group is a semisimple Lie group but not necessarily connected). This result has an important consequence called "dimension rigidity", that is, the two dimensions are still equal for a group commensurable to a lattice of G.

We present the solution of the minimal entropy problem for non-geometric, closed, orientable 3-manifolds (that is, those manifolds which do not admit a com- plete metric locally isometric to one of the eight 3-dimensional model geometries). Together with the results of Besson-Courtois-Gallot for locally symmetric spaces and the work of Soma, Gromov et.al. on the simplicial volume of 3-manifolds and its relation with entropy, this gives a complete picture of the minimal entropy prob- lem for all closed, orientable 3-manifolds. Our work strongly builds on Souto's PhD work (unpublished), filling some gaps in the proof and completing the picture in the case of non-prime manifolds. In detail, we show that the minimal entropy is ad- ditive with respect to the prime decomposition and that for an irreducible manifold X it coincides with the sum of the volume entropies of all the JSJ components of hyperbolic type, each endowed with its complete, hyperbolic metric of nite volume. For the lower bound of MinEnt(X), we adapt Besson-Courtois-Gallot's barycenter method following Souto's ideas; then, we show how this lower bound is realized by producing a sequence of Riemannian metrics gk on X whose volume-entropies tend to

Coupled map systems are simple models of a finite or infinite network of interacting units. The dynamics of the compound system is given by the composition of the (typically chaotic) individual dynamics and a coupling map representing the characteristics of the interaction. The coupling map usually includes a parameter s in [0,1], representing the strength of interaction. The main interest in such models lies in the emergence of bifurcations when s is varied. We first introduce our results for small finite systems. Then we initiate a new point of view which focuses on the evolution of distributions and allows to incorporate the investigation of a continuum of sites.

We are interested in the asymptotic behaviour of the first return time of the orbits of a dynamical system into a small neighbourhood of their starting points. We study this quantity in the context of dynamical systems preserving an infinite measure. More precisely, we consider the case of Z-extensions of subshifts of finite type. We also consider a toy probabilistic model in order to enlighten the strategy of our proofs.