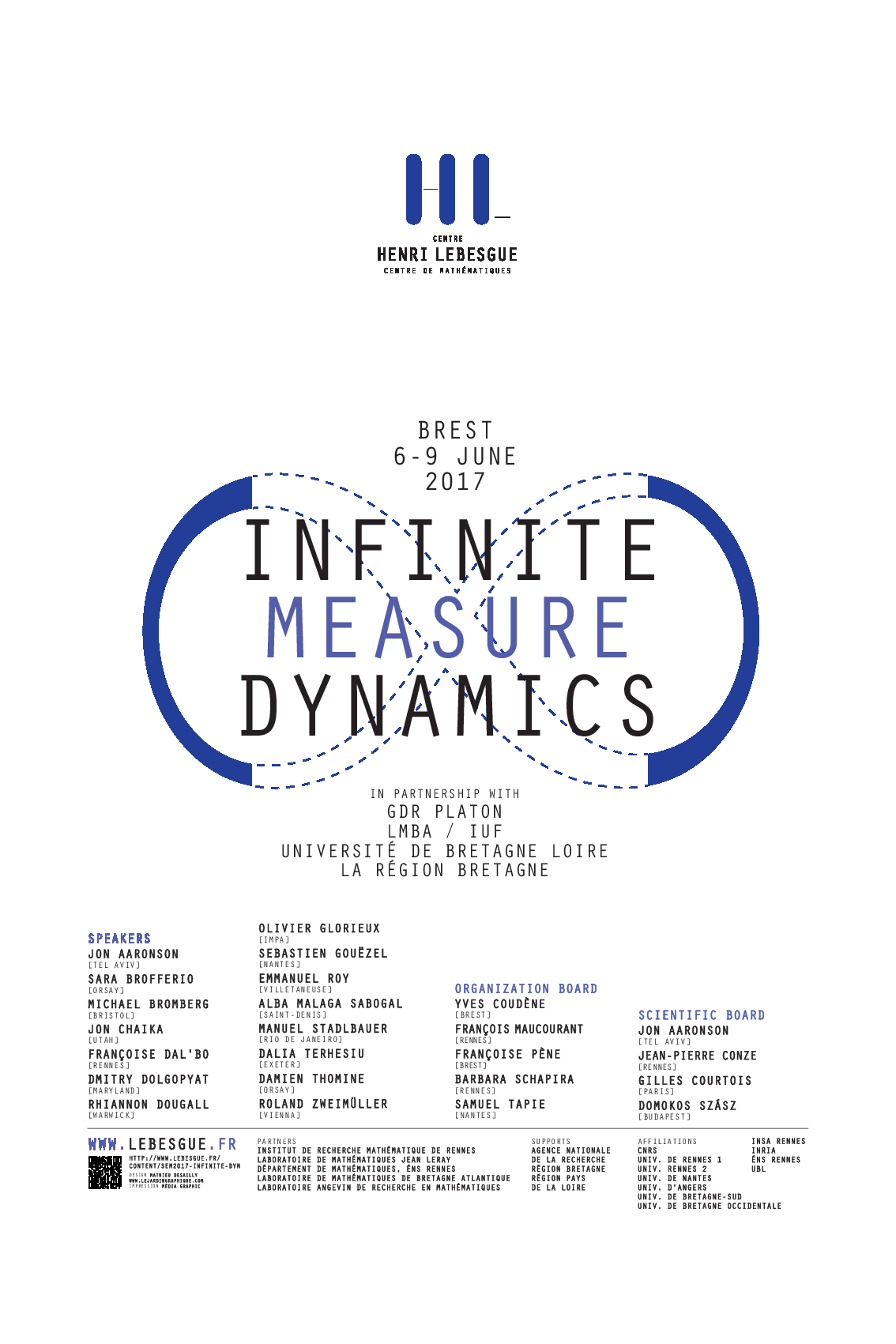 This conference will focus on dynamical systems which naturally preserve a measure with infinite mass. These systems appear in a geometric or probabilistic context, or may come from natural sciences. When the invariant measure has infinite mass, recurrence is no longer automatic, usual mixing properties disappear and new asymptotical properties (such as rationnal ergodicity) may occur. Such systems may develop various and subtil behaviours, which could not exists in finite measure dynamics.

This conference will gather international experts on this topic, and will allow young researcher to have an easy access to the large recent developpment on such questions.

The main construction follows by ”inversion” from a cutting and stacking construction showing that every random variable on the positive reals occurs as the distributional limit of the partial sums some positive, ergodic stationary process normalized by a 1-regularly varying normalizing sequence (indeed, here the process can be chosen over any EPPT).

We consider stochastic dynamical systems Xn = Yn(Xn−1), where Yn are i.i.d. random continuous transformations of R. We assume that Yn(x) behave asymptotically like Anx, for some random positive number An. The main example is the stochastic affine recursion Xn = AnXn−1+Bn, but this class includes other interesting processes such as reflecting random walks or branching process. Our aim is to describe invariant Radon measures of the process {Xn} in the critical case, when ElogA = 0. Under optimal assumptions, we prove that those measures behave at infinity like dx/x. In the proof we strongly use some properties of random walks on the affine group. The talk will be based on a joint paper with Dariusz Buraczewski.

For a measure preserving system (X,B,μ,T ) and a real valued function f on X, temporal random variables along an orbit of a fixed point x in X are obtained by considering the Birkhoff sums Sn(f,x), n = 1,...,N and choosing n randomly uniformly from 1, ..., N. These r.v’s, measure the fraction of time that Birkhoff sums spend in various sets. If, under proper normalization, as N tends to infinity, these variables converge to a non-atomic distribution, we say that f satisfies a temporal limit theorem along the orbit of x (when the limit is Gaussian, we refer to this as temporal CLT). The aim of the talk is to introduce the relevant concepts and sketch a proof of a temporal CLT for piecewise constant cocycles with a single breakpoint, over an irrational rotation with a badly approximable rotation number. This result generalises earlier results by J.Beck and by D.Dolgopyat and O.Sarig. This is joint work with C.Ulcigrai.

Let T be a linear recurrent interval exchange transformation. This is ameasure zero, but full Hausdorff dimension set of interval exchange transformations that are analogous to badly approximable rotations. We show that an R valued skew product over such an IET by an integral 0 function that is a linear combination of characteristic functions of intervals is typically ergodic. Relevant terms will be defined. This is joint work with Donald Robertson.

Joint work with M.Peign´e, J-C Picaud,A.Sambusetti. I will explain how to construct a noncompact negatively curved Riemannian surface with finite volume admitting an infinite Bowen-Margulis measure.

I describe an approach to proving local limit theorems and related for flows based on (multidimensional) local limit theorem for associated Poincare map. Both finite and infinite measure case will be discussed. Based on a joint work with Peter Nandori.

We are interested in the dynamics of the geodesic flow for infinite volume manifolds M which arise as a regular cover of a fixed compact (or convex cocompact) negatively curved manifold M0. Writing hM for the exponential growth rate of closed geodesics in M, we have that hM ≤ h0, where h0 is the topological entropy of the geodesic flow for M0. We answer the question of when there is a uniform gap hM < h0 in M in terms of the permutation representations given by the covering M of M0. The proof uses the symbolic dynamics for the flow, and so we formulate the analogous statements for countable state shifts obtained as group extensions of a finite state shift.

The aim of my talk will be to explain how classical invariants and theorems for groups acting on the hyperbolic space, can be extended to the Anti-de Sitter (AdS) setting. We will recall the notion of critical exponent and Hausdorff dimension for discrete action on the hyperbolic space and explain how we can define similar notions for a certain type of groups acting on AdS manifolds. We will finally explain how to get a rigid bound for these invariants in dimension 3 which is a result equivalent a famous result obtained by R. Bowen in ’79 . This is a joint work with D. Monclair.

In non-uniformly hyperbolic dynamics, Pesin sets are measurable sets where the dynamics is very well understood. However, their definition makes these sets hard to control in a quantitative way, even when the underlying dynamics is hyperbolic. We will explain why such a control is useful, and what kind of bounds we can obtain. Joint work with L. Stoyanov.

The Wind-Tree is an example of a dynamical system that has a very simple description, while having a very rich dynamics. It’s a particular case of a billiard: a particle (the wind) goes straight forward as long as it does not meet any obstacle and it bounces elastically at each obstacle met. There is an infinite number of square obstacles which are distributed irregularly all over the plane. The dynamics will strongly depend on the distribution of the obstacles. The different configurations live in a Baire space - we can thus ask what happens for a generic configuration (i.e. a configuration in a G δ -dense set). We found that generic Wind Tree dynamics is actually nice: minimal, ergodic and of infinite ergodic index in almost every direction. This is joint work with Serge Troubetzkoy.

The aim of the talk is to relate a general notion of amenability of graphs with the probability of return of a random walk with stationary increments. That is, for a Markov map T : X → X with embedded Gibbs-Markov structure (i.e. T is a tower over a Gibbs-Markov map with full branches) and κ a map from X to the automorphisms of the graph, we relate the decay of μ ({x :κ(T n(x))⋅⋅⋅κ (T(x)) ∘κ(x)(o)= o}) with the amenability of the graph. It turns out that on the level of the embedded Gibbs-Markov structure, amenability is equivalent to spectral radius equal to 1 of the transfer operator of the graph extension. In particular, this generalizes results by Kesten, Day and Derriennic and Guivarc’h for random walks with independent increments. With respect to T , the relation is more intricate and requires additional assumptions. These results have canonical application to the geodesic flow on H∕G, where G is a subgroup of a finitely generated Fuchsian group. This is joint work with Johannes Jaerisch (Shimane, Japan) and Elaine Rocha (Salvador, Brazil).

This is a work in progress, with Elise Janvresse and Thierry de la Rue.

We recall that semistable laws is a class of infinitely divisible laws, which complements the more well known stable laws. I will recall some main, previously established, results on necessary and sufficient conditions for the existence of semistable laws for i.id. random variables. I will report on work in progress with Peter Kevei which aims toward a complete understanding of a limit law for null recurrent renewal chains, assuming that the involved return function is in the domain of a semistable law (as such, no strict regular variation is required). Some analogies with the Darling Kac law will be discussed. If time remains, I will present some results of work in progress with Douglas Coates on semistable laws for interval intermittent maps.

Given a random walk on Zd, one may be interested in a large variety of questions on its statistical porperties (such as ”What is the probability of being at a given site at a given time?”). Here, I shall discuss questions such as:

In the setting of random walks, the answer to these questions is well known, and involves the induction invariance of the solutions of the Poisson equation.

In the setting of Zd extensions of dynamical systems, however we lose the Markov property, and thus we cannot use these tools. However, I’ll show that these can be partially replaced by a use of Green-Kubo’s formula, which still satisfies some induction invariance in this more general setting. This gives us answers for dynamical systems such as the geodesic flow on periodic hyperbolic surfaces, or (in part) Lorentz’ gases.

I will present some work on the asymptotics of return- and hitting-time distributions of small sets in certain infinite measure preserving systems, as the measure of these sets decreases to zero (“rare events”). My focus will be on fairly nice concrete systems and an abstract setup accommodating them. This includes joint work with F. Pene, B. Saussol, and S. Rechberger.